According to the Romanian Red Cross, the number of refugees arriving from Ukraine has dropped recently from tens of thousands per day in the early days of the conflict to thousands or even less than a thousand per day.

BUCHAREST, May 13 (Xinhua) — At the Romanian capital’s North Railway Station, a tall young girl was enthusiastically conversing with an elderly Ukrainian couple who had just entered a temporary reception room for Ukrainian refugees while preparing coffee for the newcomers.

The girl is Olena Trofimchuk, a Ukrainian from Odessa who now volunteers as a translator in the station to help Ukrainian refugees overcome the language barrier.

The 26-year-old said she was a freelance photographer before the outbreak of the Russia-Ukraine conflict.

„I left Ukraine because my mom started worrying,” Trofimchuk told Xinhua. „So mom, grandma and me went by car to the Republic of Moldova, then we drove on to Galati in eastern Romania, where we spent a few days in a refugee center,” she told her story. „We soon managed to find a place to stay in Bucharest on a website dedicated to refugees.”

Talking about how she decided to become a volunteer, the young Ukrainian recalled: „One day, a fellow citizen who was already helping at the station asked me to help.” She then immediately came to help and has since been working with a group of „friendly and helpful” Romanian volunteers. 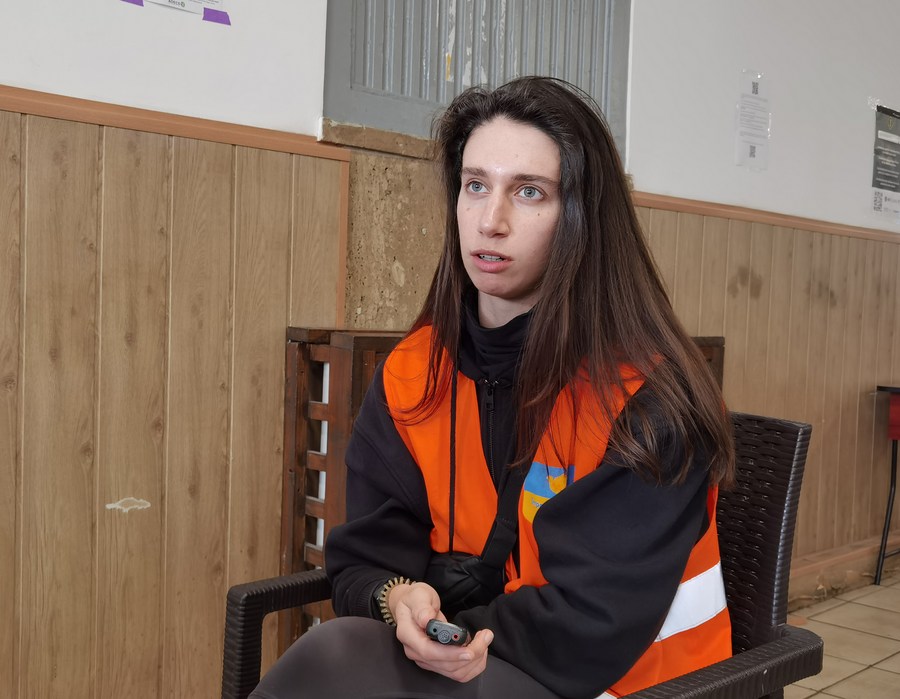 Olena Trofimchuk speaks to Xinhua in an interview at the North Railway Station in Bucharest, capital of Romania, April 21, 2022. (Xinhua/Lin Huifen)

While „on duty,” Trofimchuk spares no effort to welcome and assist the newly arrived. „I buy tickets and search for accommodation for my compatriots. Sometimes I also help the Romanian volunteers in the kitchen.”

Bucharest’s North Railway Station has been a hub for Ukrainian refugees arriving and traveling on to other parts of the country or Europe. The four waiting rooms at the station have been turned into temporary reception rooms for Ukrainians run by various non-governmental organizations (NGOs).

„We also have a support point at the station, where we provide 24/7 assistance,” Romanian Red Cross President Ioan Silviu Lefter told Xinhua in a recent interview.

According to Lefter, most Ukrainians cross the border directly to Romania or enter the country via the Republic of Moldova. They all are helped by the Romanian border authorities. Some of the refugees intend to stay in Romania, while others plan to continue their journey to other destinations in Europe. 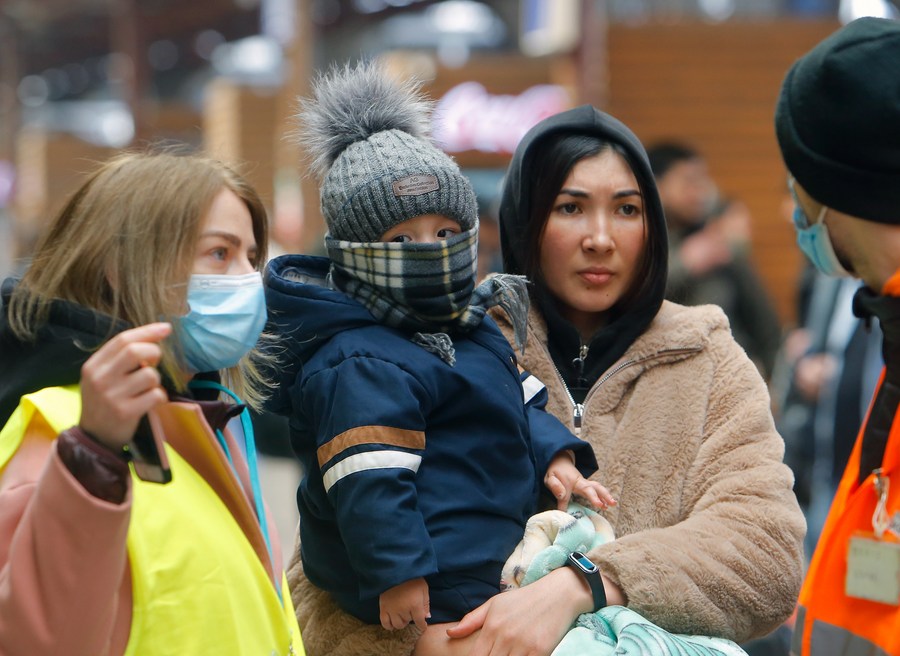 Local volunteers help people from Ukraine at a railway station in Bucharest, capital of Romania, March 5, 2022. (Photo by Cristian Cristel/Xinhua)

„For those who choose to stay in Romania, they were offered different options: either going to one of the accommodations managed by the state or staying temporarily in the home of a resident,” explained Lefter.

He said the number of refugees arriving from Ukraine has dropped recently from tens of thousands per day in the early days of the conflict to thousands or even less than a thousand per day, though no one knows how the situation will evolve.

Always smiling and energetic, Trofimchuk is eager and determined to help her compatriots in distress, to make them feel safe and looked after. She comes across all kinds of people and spares no effort to lend them a helping hand.

„The North Railway Station is now my second home. I already made many friends, but of course I miss my home. Every day when I wake up, I wonder: When will I be able to return home?”

Trofimchuk remains in touch with her family, friends and neighbors back home. She knows that her house is safe but „uncertainty” prevails.

„No one knows what the future will bring … We are hoping our town will be safe at the end of May,” she said. ■

Anti-Russian sentiment on rise in Germany amid Ukraine crisis