The recent spike in energy prices and the impact of the Russia-Ukraine conflict have made Lola Exposito, a Spainish taxi driver, wonder whether she can weather the storm this time.

BARCELONA, May 4 (Xinhua) — Lola Exposito has been driving one of Barcelona’s iconic black-and-yellow taxi cabs for the past 16 years.

Having survived the 2008 economic downturn, the competition with Uber and the coronavirus pandemic, she considers herself lucky.

She works from 8 a.m. to 5 p.m. To make the best use of her taxi license, Exposito, 57, has employed her son for four years now to do the night shift, which lasts until 1 a.m. In the past two years, the COVID-19 restrictions have reduced the number of her customers to 20-25 per day on average from 30 or more before the pandemic.

However, the recent spike in energy prices and the impact of the Russia-Ukraine conflict have made her wonder whether she can weather the storm this time. Her monthly costs have gone up from roughly 400 euros (425 U.S. dollars) to over 600 euros — a 50 percent jump.

„This is a huge increase, and it’s really affecting us,” she said. People shop at a supermarket in Caceres, Spain, on March 23, 2022.  (Photo by Gustavo Valiente/Xinhua)

Her income has already decreased by 20 percent because of the pandemic, and now the surge in oil prices eats up another 10 percent.

Like most of her compatriots, she keeps comparing grocery prices in supermarkets to check how much more she needs to pay for lettuce or tomatoes.

She has also changed her habits: she tries to use electricity when it is cheaper and thinks twice before turning on appliances with high power consumption, such as the oven, the dishwasher or the washing machine.

In March, the average price of electricity was 283.3 euros per megawatt hour (MWh) — 80 euros more than in February and six times more than a year ago, when it cost 45.44 euros per MWh.

Nevertheless, she would not hesitate to turn on the heater in her home. „My mother lives with me and I want her to be comfortable,” she said.

And she is reluctant to compare her electricity bills. „I don’t know how much it went up and I don’t want to know — it’s certainly more expensive now.”

Countless taxi drivers across Spain live in the same shoes. On March 23, many of them staged a „slow drive” protest in Barcelona that started at the airport and finished at the gates of the Parliament of Catalonia. Local police said that 300 cabbies participated.

Tito Alvarez, spokesperson for the Elite Taxi union, said that rising fuel prices are denting the drivers’ profitability and that further protests are in the cards unless urgent government action is taken.

Spain’s truck drivers also went on a 20-day strike recently that disrupted traffic and food supplies across the country. 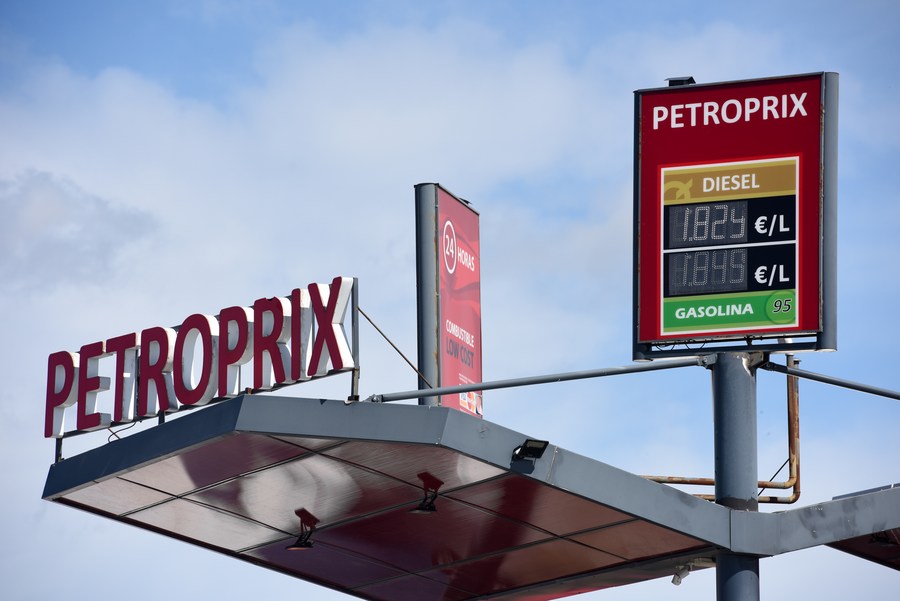 Photo taken on March 12, 2022 shows a gas station amid rise of fuel prices in Madrid, Spain. (Photo by Gustavo Valiente/Xinhua)

Under mounting political and social pressure, the Spanish government passed a package of emergency measures to tackle the energy crisis. The new measures came into effect on March 30 and included a 20-cent discount per liter of fuel for all drivers. Since then, fuel prices have decreased by 10 percent, down to 1.647 euros and 1.613 euros a liter, respectively.

However, prices are still way higher than a year ago. Gasoline costs 22.2 percent more and diesel 33.9 percent more.