Children from Ukraine wait to receive aid supplies at the border in Medyka, Poland, on Feb. 28, 2022. (Xinhua/Meng Dingbo)

Due to various problems, such as assimilation and integration issues, many Ukrainian refugees are about to leave. According to data released in mid-April by the United Nation’s aid coordination office, more than 870,000 Ukrainians who fled abroad since February have already returned to their home country, and about 30,000 Ukrainians are crossing back into Ukraine every day.

WARSAW, May 11 (Xinhua) — If it were not for the conflict between Russia and Ukraine, the office building at 7 Woloska Street in Warsaw might have been demolished to make way for a new business park.

Today, it is home to about 400 Ukrainian refugees.

In this eight-story building, the offices have been transformed into bedrooms, a cloakroom on the first floor is now a playground for children, and the third floor is used by visiting therapists and psychologists.

There is also an infant room on the top floor. So far, three Ukrainians have given birth in the building.

There are some 30 similar reception centers in Warsaw alone for people fleeing the conflict in Ukraine.

Poland has already taken in over three million Ukrainians, according to the country’s Border Guard. Over 300,000 of them, including 120,000 children, have ended up in Warsaw, a city with a population of less than 1.8 million.

The influx undoubtedly presents a huge challenge to both the country and its capital.

Michalina Wieczorek, one of the center’s two full-time employees, told Xinhua that the COVID-19 pandemic has posed a challenge for them as infections were reported in the building both in March and April.

„We isolate them, test the others, and bring back those who test negative,” she said.

Financing is another headache, according to Wieczorek. She said that if the European Union fund does not arrive soon, it will be very difficult for them.

„Prices are high. And (there’s) the inflation. But people keep coming,” her colleague Bartosz Domanski added.

Poland’s Deputy Foreign Minister Pawel Jablonski said in mid-April that in the face of the „biggest refugee crisis since World War II (WWII),” the burden of helping those affected by the conflict „shouldn’t be borne only by Ukraine’s neighbors.”

Then there is the shortage of manpower.

For now, non-governmental organizations (NGOs) and volunteers still provide the lion’s share of support. Many of the latter take time off from their jobs to help at the center, which is anything but sustainable in the long run.

Ptak Warsaw Expo, the largest exhibition center in central Europe and now a major aid point for Ukrainians arriving in Poland, has already hosted 65,000 of them since the onset of the Russia-Ukraine conflict.

„Actually, the very beginning was difficult and it was easier because everybody wanted to help. Everybody wanted to be engaged. So it was fine. We were full with supplies; our warehouse was full. But now, you know, engagement is much, much lower,” said Marta Pasternak, the expo’s international key account manager.

„But people are a little bit tired now. They don’t have the resources anymore,” She said, adding that the supply is running low in the center.

Dominika Pszczolkowska is a migration researcher at the Center of Migration Research of the University of Warsaw. Her research interests include migration and integration policies. She told Xinhua that Poland’s health and education systems are now under equal pressure.

„Even before the conflict, we had a shortage of teachers, quite an acute shortage,” she said. „If you want to add 100,000 students, obviously, the shortage is going to be much larger.” 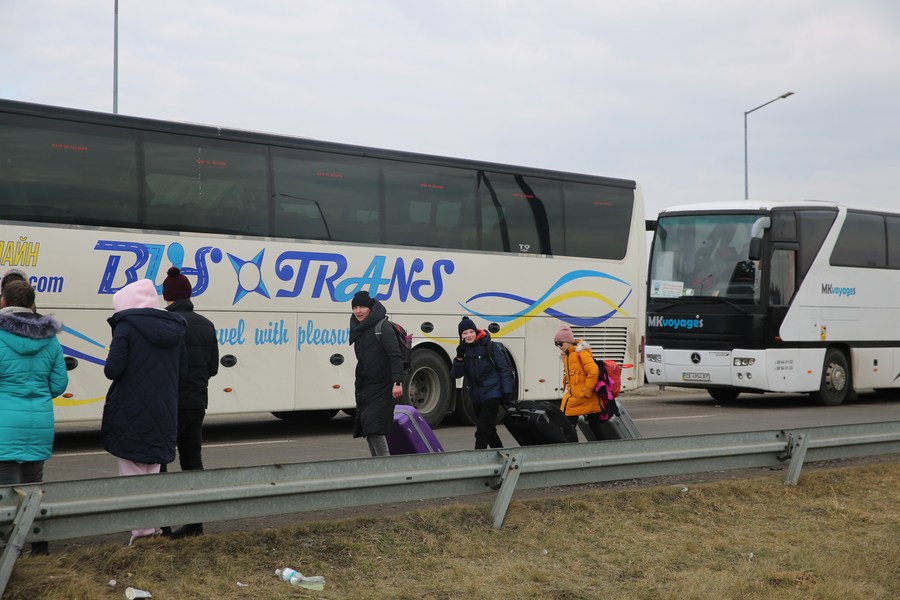 Housing is the same.

Finding temporary shelter appears to be relatively easy for the Ukrainians, but „the problem is finding something for longer term, because people put up guests for a week or two, but that’s not the solution that can last for months,” Pszczolkowska said.

„At least in Warsaw, the housing market was already pretty tight before the conflict. And now we have added about 17 percent of inhabitants of the city. So, they have difficulty finding rental apartments, even if they can pay as they have savings or a job,” she added. Due to various problems, such as assimilation and integration issues, many Ukrainian refugees are about to leave. According to data released in mid-April by the United Nation’s aid coordination office, more than 870,000 Ukrainians who fled abroad since February have already returned to their home country, and about 30,000 Ukrainians are crossing back into Ukraine every day.  ■